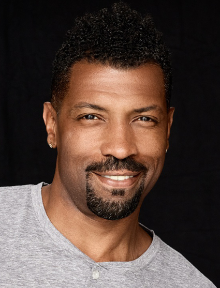 Deon Cole is a comedian, writer, and actor who can currently be seen as Charlie on ABC’s "Black-ish" and Freeform’s "Grown-ish." Deon won Outstanding Supporting Actor in a Comedy Series at the 51st NAACP Image Awards in 2020, and at the 52nd NAACP Image Awards in 2021 for his work on "Black-ish." Deon can currently be heard as the voice of Dave, for Dreamworks Animation’s Netflix series "Kipo and The Age of Wonderbeasts." Previously, he starred as Detective Daniel “DJ” Tanner on the TBS comedy "Angie Tribeca" opposite Rashida Jones.

Deon stars in the Netflix film "The Harder They Fall," opposite Regina King and Idris Elba, directed by Jeymes Samuels. He also starred in the Whitney Cummings directed feature "The Female Brain," opposite Sofia Vergara, and was featured in the Ice Cube led "Barbershop" series. He can also be seen in "Friendsgiving," produced by Red Hour Films. In standup, Deon’s latest one-hour special for Netflix, "Cole Hearted" was recently released after the success of his appearance on the Netflix original, "The Standups." His previous one-hour special, "Deon Cole: Cole Blooded Seminar" was shot for Comedy Central. His stand-up documentary, "Workin’ It Out," recently debuted exclusively on the Netflix is a Joke Youtube channel, and has garnered 6 million views on social media with 1.4 million views on Youtube alone.

With ever-changing guidelines and mandates, please refer to the local government agencies for the most up-to-date information. Customers are expected to take necessary precautions to protect themselves and others.

Dine with us at the Factory prior to the show by making a reservation HERE!

Emmy nominated Actor and Comedian Deon Cole is one of the most in-demand talents in Hollywood. Simultaneously gracing our screens as Charlie on ABC’s Black-ish and ABC Family’s Grownish, Detective Daniel “DJ” Tanner on the TBS comedy Angie Tribeca and the host of BET’s game show Face Value, the world can’t get enough of Deon Cole.

Deon began his career on the south side of Chicago and currently calls Los Angeles home. In addition to Deon’s cast member status on four TV shows, Deon appeared in the Whitney Cummings directed film The Female Brain, and will soon be seen in Friendsgiving, produced by Ben Stiller’s Red Hour Films, and the Kim Bass directed film HeadShop. He is no stranger to the big screen with previous roles in the Ice Cube led Barbershop series.

Deon has been featured on several fan-favorite series such as Benched (USA), The League (FX), and Wild N’ Out with Nick Cannon (MTV). He hosted his own series, Deon Cole’s Black Box on TBS in 2013 and he is a familiar face on the late night and daytime circuits with appearances on Conan (TBS), @midnight (Comedy Central), Last Call with Carson Daly (NBC), The Talk(CBS) and The Real (BET). When not on set, you can find Deon on the road, consistently connected to his stand-up comedy roots. His standup comedy has also been featured on Shaq's All-Star Comedy Jam (Showtime), John Oliver’s New York Stand-Up Show (Comedy Central), and Laffapalooza (Comedy Central), along with his own Comedy Central Presents: Deon Cole. His hour long stand-up standup special will be coming to Netflix late in 2018 as well.

Deon has racked up awards and accolades throughout his career. As a staff writer for The Tonight Show with Conan O'Brien (NBC) he received his Writer’s Guild Award and his first Emmy nomination. He earned his second Emmy nomination when he wrote for Conan O’Brien when he hosted the White House Correspondents Dinner in 2013. In 2017 NAACP Image Award nomination for “Outstanding Supporting Actor in Comedy Series” for his work on Black-ish.

Deon is looking to continue his “renaissance man” ways with the creation of his production company Cole Blooded Productions. Cole Blooded is looking to develop innovative television and film content in the world of pop culture and comedy. Deon looks forward to being a constant on your TV and any stage across the country for many years to come.