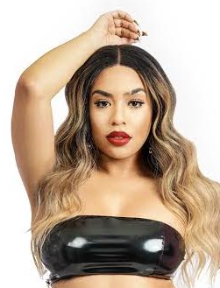 B. Simone is a comedian, actress, and businesswoman originally from Dallas TX and who now resides in Atlanta GA. B Simone is a long standing cast member of MTV’s hit series Wild N Out with six seasons to her name – her other acting credits include multiple feature films as well as dozens of appearances on BET, MTV, and VH1. The exposure has brought her a huge fanbase of over 5,000,000 Instagram followers and her own wildly popular make up line BSimoneBeauty.

B Simone is also taking over the world of stand up comedy, headlining her own sold out comedy tour in clubs across the country and appearing as a special guest alongside comedy legends on the Ladies Night Out Comedy Tour and the Lit AF Tour with Martin Lawrence.

Customers are expected to take necessary precautions to protect themselves and others. Per the CDC and local governments, we require all customers to enter the facility wearing a face covering or mask. When customers are seated, they are permitted to remove such covering while eating or drinking.

Braelyn Greenfield, better known as B.Simone, hails from Dallas, Texas and spent the majority of her adult life in the south. Simone is cast member on the MTV hit tv show Wild N' Out. B.Simone was a special guest host for 106 & Park. B. Simone co-starred in a Bet film Digital Lives Matter with Dc Young Fly. Her Instagram videos has received recognition from the likes of Chris Brown, Rihanna, Lil Boosie, Ti and Many more. B. Simone has a crazy Instagram following with over 1.4 million followers and growing daily. Her ultimate goal is to be an actress and movie star aka the "Female Jamie Foxx". She recently released a new album Stack Now Cry Later that was stemmed from a viral "Fvckboy Video". B.Simone is currently headlining her own tour entitled "Looking For My Boooyfriend tour " selling out show after show.