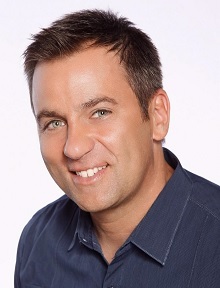 Audiences of all ages relate to John Heffron's enthusiastic, hard-won wisdom, recognizing how often the path to maturity is marked by universal triumphs and failures. A Midwestern boy at heart, Heffron touches on relationships, friendships, and experiences from childhood all with an honest and relatable perspective.

Customers are expected to take necessary precautions to protect themselves and others. Per the CDC and local governments, we require all customers enter the facility wearing a face covering or mask. When customers are seated, they are permitted to remove such covering while eating or drinking.

John Heffron burst onto the comedic scene during the prime of his college heyday. Although he graduated in his home state of Michigan, Heffron’s priorities became clear when he began to skip class to perform live stand up. His first gig was on the University of Michigan’s campus at the Main Street Comedy Showcase. Since then, his comedy has evolved in a unique and creative fashion as he has grown from a fun-loving college student to a bewildered husband and stepfather.

John’s attraction to excitement and his personal vow to never perform physical labor have both inspired and motivated his successful career. The endless list of credits that comprise his impressive resume highlight his many significant accomplishments. Having won the second season of NBC’s Last Comic Standing, Heffron’s popularity grew tremendously. John’s amusing and extensive material has earned him two half hour specials and a one-hour special on the hit stand up show Comedy Central Presents. He has become a regular on numerous VH1 satire series including I love the 80s: 3D, I Love the 70s: Volume 2, and My Coolest Years: My First Time. In addition to being featured on Thom Filicia’s Dress My Nest, Heffron has performed on CMT’s Coming to the Stage, NBC’s Late Friday, and Comedy Central’s Premium Blend. He has made numerous appearances on The Tonight Show with Jay Leno, and E’s! Chelsea Lately and 101 Craziest TV Moments. John is no stranger to live audiences and has taken the stage at several prestigious comedy festivals including the Las Vegas Comedy Festival, the Just for Laughs festival in Montreal and the HBO Comedy Festival in Aspen. He even had the recent honor of being a celebrity roaster for KISS’ Gene Simmons on an episode of A&E’s Gene Simmons: Family Jewels. John shot a pilot presentation entitled: “Stepjohn” in association with Second City Television and Paramount Television for CBS based on his stand-up and real life experiences. This past December John was the sole host of the World MMA Awards shot before a live audience of 3000 at the Hard Rock Hotel & Casino in Las Vegas. Most recently, John shot a pilot for History Channel called “Man Up, America!”

From his early days as a DJ on Detroit’s number one morning show, Danny Bonaduce and the Q Crew, to one of his current roles sharing the screen with Courtney Cox-Arquette on FX’s Dirt, Heffron has hailed experience from many talented comedians. However, his endless innovation can easily be seen in his own comedy. John’s first live stand up CD, Kid with a Cape, debuted over ten years ago. As a result of his constant touring, his routine has developed and grown and two more successful recordings, Good Kid, Bad Adult and The Better Half, have been released.

John co-hosted The Tony Rock Project on My Networks, which aired last fall. He also has a brand new one-hour special released on DVD “Middle Class Funny.” Any stand up patron can relate to this comedian’s diverse material that ranges from bar hopping adventures in his twenties to married life in his thirties. John Heffron’s youthful personality and cynical wisdom result in a witty combination that nobody can resist. He has managed to accomplish what most stand-up comedians can only dream of.

John’s most recent endeavor is the publication of his new book “I Come To You From The Future: Everything You’ll Need To Know Before You Know It,” which is a best seller and can be found on Amazon. This is the most recent insight into the journey that is John Heffron.