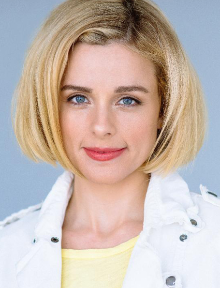 Erica Rhodes has appeared on ABC’s "Modern Family," HBO’s "Veep," Fox’s "New Girl," IFC’s "Comedy Bang Bang," and recurred on TruTV’s "Fameless." She was a regular panelist on Comedy Central’s "@midnight" and Fox’s "Punchline." Her stand-up TV appearances include the CW’s "Howie Mandel Comedy Extravaganza," NBC’s "Bring the Funny" and "Last Call with Carson Daly," SeeSo’s "The Guest List," Hulu’s "Coming to the Stage," and AXS’ "Live at Gotham." Erica has performed at the Just for Laughs Festival (Montreal), San Francisco Sketchfest, the Moontower Comedy Festival (Austin, TX), the Blue Whale Comedy Festival (Tulsa, OK), the Boston Comedy Festival, and RIOT L.A. Fest. She also starred in the ABC Digital series "The Off-Season," was a semi-regular performer/writer on NPR’s "A Prairie Home Companion," and a recurring character on the Audible series, "Dr. Katz: The Audiobook." Erica starred in "Tour Dates," a 2019 comedy pilot for E! Her first album, "Sad Lemon," was recently released and hit #1 on the iTunes comedy charts. She was most recently seen this summer on NBC’s "Bring the Funny," where judge Jeff Foxworthy described her as the best defined comic voice of the competition.

Due to capacity restrictions and recommendations by local authorities and in the interest of social distancing, we will be selling tables rather than individual tickets to our events. At this time, customers will not be sharing tables with anyone other than their party. Tables are maxed out at 4 people per table. In the event more than four people are attending a show together as a group, you will be separated into multiple tables and these tables will maintain 6-foot social distancing rules.

Each table comes with the corresponding number of tickets:
2 top = 2 tickets | 4 top = 4 tickets

Erica Rhodes is a regular panelist on Comedy Central’s @midnight and Fox’s Punchline. She has made appearances on SeeSo’s The Guest List, Hulu’s Coming to the Stage, AXS’ Live at Gotham and the syndicated Comics Unleashed. Erica has performed at San Francisco Sketchfest, the Moontower Comedy Festival (Austin, TX), the Blue Whale Comedy Festival (Tulsa, OK), the Boston Comedy Festival and RIOT LA Fest. Recent TV credits include ABC’s Modern Family, HBO’s Veep, Fox’s New Girl, and IFC’s Comedy Bang Bang. Erica stars in Audible’s Dr. Katz: The Audio Files and ABC Digital’s The Off Season. She recurs on TruTV’s Fameless and has been a semi-regular performer/writer on NPR’s A Prairie Home Companion.