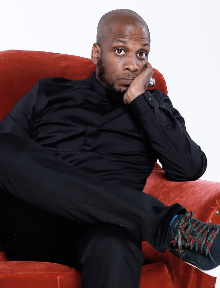 Ali Siddiq is a stand-up comedian, public speaker, and writer out of Houston. His unique style of stand up began behind the walls of incarceration, an incubator for interesting experiences and good stories. People received their first taste of Ali Siddiq when he appeared on HBO's "Def Comedy Jam" and "Live from Gotham" and in 2013 he was named Comedy Central's #1 Comic to Watch. Ali recently impressed comedy enthusiasts by displaying his ability to captivate an audience with his "Mexican Got Boots On" tale, a descriptive storytelling of a prison riot on Ari Shaffir's "This is Not Happening."

Due to capacity restrictions and recommendations by local authorities and in the interest of social distancing, we will be selling tables rather than individual tickets to our events. At this time, customers will not be sharing tables with anyone other than their party. Tables are maxed out at 4 people per table. In the event more than four people are attending a show together as a group, you will be separated into multiple tables and these tables will maintain 6-foot social distancing rules.

Each table comes with the corresponding number of tickets:
2 top = 2 tickets | 4 top = 4 tickets

Management reserves the right to prevent customers from entering the facility who they deem disruptive or dangerous to other patrons. In the event you are asked to leave the premises, your money will be refunded.


If you have questions regarding your safety and the steps we're taking to approach COVID-19, please review our updated FAQ page below:

Comedy fans from across the country have selected rising star Ali Siddiq as the Grand Prize winner of Comedy Central’s ”Up Next” A CC: Certified Talent Search

Comedy Central’s “Up Next” A CC: Certified Talent Search scours the country seeking out the best and brightest up and coming stand-ups with aspiring comedians performing at participating Comedy Central Certified Clubs. Over 300 stand-ups began the competition performing in preliminary local showcases at 27 CC: Certified Clubs in September. Then 40 of the most-promising new comedians in America moved on to semi-final showcases in Boston, Chicago, San Francisco and Ft. Lauderdale in October with nine finalists being chosen including Siddiq, along with Tone Bell, Chris Cubas, Randy Liedtke, Nimesh Patel, Joe Pera, Dave Thomason, Aaron Weaver and Jenny Zigrino who were then flown to New York to perform at the 4th annual “Comics to Watch,” hosted by Jonah Ray, in November.

Comedy fans nationwide were able to watch the “Comics to Watch” performances on cc.com/up next and listen to them on Comedy Central Radio on SiriusXM and vote online for their favorite and Grand Prize Winner of the “Up Next Fan’s Pick.”

Siddiq won a prize package that includes an appearance on a future Comedy Central stand-up series, a performance slot in an upcoming Comedy Central Live college tour, a Comedy Central Records digital release, placement on the CC:Stand-Up site and CC: Stand-Up App, a stint as a guest DJ on Comedy Central Radio (SiriusXM channel 95), and $2500 cash.

Ali Siddiq’s journey through the “Up Next” talent search began with a performance in a preliminary local showcase at the Houston Improv in September after which he was selected to move on toperform at a semi-final showcase at the Chicago Improv in October. From there, Siddiq performed at the “Comics to Watch” showcase during the 2013 NYCF in November at the legendary Carolines on Broadway.

Siddiq is a Houston native and has appeared on the season finale of HBO’s Def Comedy Jam, BET’s One Mic Stand and Bill Bellamy’s Who’s Got Jokes on TV One. Adding to the stand-up performances, Siddiq has also lent his voice and perspective on TV One’s Washington Watch with host Roland Martin.

“Comics to Watch” is a show held annually by Comedy Central and The New York Comedy Festival at Caroline’s on Broadway which features a wide range of diversely talented young comedians. It was created to launch the careers of the next generation of comedians by putting them in front of industry executives and comedy fans. Comedians from past “Comics to Watch” shows such as Brooks Wheelan, Michael Che, Chris Distefano, Emily Heller, Ben Kronberg, Kurt Braunohler, and Sara Schaefer have gone on to making stand-up appearances on Comedy Central shows.