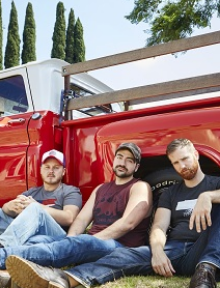 Trae Crowder (The Liberal Redneck), Drew Morgan and Corey Ryan Forrester are stand-up comedy and writing partners. The trio has been touring nationally to sold out clubs and theatres in support of their best-selling book, Liberal Redneck Manifesto: Draggin Dixie Outta the Dark.

This year’s tour, wellRED: From Dixie With Love, is about celebrating everything great about the South and telling stories from a place of love. It’s about dancing to country music at a gay wedding. It’s about loving your neighbor whether you have the same religion, skin color, or sexual preference, as long as they cheer for the same college football team (Go Vols!). It is about leaving behind bigotry, but remembering the fried okra.

Do you love all people, but also love blowing shit up? Do you often wish a mother f*cker would? Well, this show is for you.

Trae Crowder's series of "Liberal Redneck" viral videos have been watch by over 115 Million people on Facebook and YouTube. He is also a regular video contributor in partnership with ATTN: and formerly, The New York Daily News.