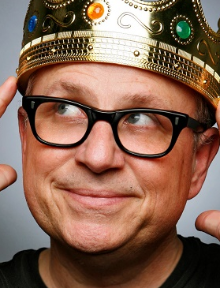 Over the years, Bobcat Goldthwait has amassed legions of fans with his brutally honest, outrageous, and off-beat comedy that has made him one of the most recognizable comedians in show business today. Goldthwait is as edgy as ever and his stand up continues to draw crowds to comedy venues across the country with his hilarious riffs on his personal life, politics, and humorous stories about his over 30 years in show business. Goldthwait's creative imagination combined with his undeniable gift to write and direct is clearly displayed on the big screen and television. Goldthwait has shared his behind-the-camera talents on several television shows, such as "Jimmy Kimmel Live," "The Demetri Martin Show," "The Chappelle Show," "The Man Show," "Maron," and "Crank Yankers." He has also directed multiple comedy specials throughout his career, including Patton Oswalt's latest special for Netflix. Goldthwait has also starred in several HBO specials and a slew of television appearances, too numerous to mention. He continues to push the envleope with his unique brand of humor, headlining major comedy clubs across the country.